Ladies and gentleman, we have entered the next stage of the iPhone 8 rumor cycle. Instead of concepts, diagrams and design leaks, there are now photos of an actual device. Well, almost.

Prolific leaker Benjamin Geskin has posted images of a purported “dummy” iPhone 8 which means it looks pretty much the same as the final device, but it’s just an empty shell, with nothing inside.

The photos show the device from all angles, and it does adhere to most of the rumors we’ve heard about the next iPhone: Two uninterrupted panes of glass with a stainless steel frame in between. There’s a vertically-oriented rear camera on the back, and the fingerprint sensor is nowhere to be seen, implying that it’s located on the front, under the glass.

The glass on the front appears to be completely flat and flush with the steel frame; on the back, it’s slightly curved, which makes the entire device highly reminiscent of the original iPhone.

iPhone 8 Dummy (This is CNC model according to Foxconn)
Back is 2.5D Glass.#iPhone8 #iPhoneX #iPhoneEdition pic.twitter.com/Z8mH7b7z4r

We’ve heard the rumor before, and now looking at the (possible) embodiment of this device in the flesh, we’re not sure what to think: It looks nice and yet underwhelming. But the devil might be in the details. For example, Geskin claims the stainless steel frame will be a polished black, meaning the entire device will look like a black monolith.

Stainless Steel will be polished black.
Just like this. pic.twitter.com/nIL3jh1SZa

The finished phone, Geskin claims, will be sized same as the regular iPhone 7; it’ll have a lightning connector, and the only thing that will detract from the polished-black-monolith look will be the camera bump on the back.

And what of the selfie camera, speaker grille and sensors on the front? Geskin has an answer to that, as well, in the form of yet another schematic. This one shows how Apple might place all of these on top of the phone’s front side without reducing the screen size by much.

This all sounds and looks nice (except, perhaps, for that vertical rear dual camera), but if some of the recent rumors we’ve heard are true, then this is just one of possible new iPhones, not the new iPhone. A Bloomberg report last week claimed that Apple is testing several possible variants of the new iPhone, including one that has a fingerprint sensor on the back. 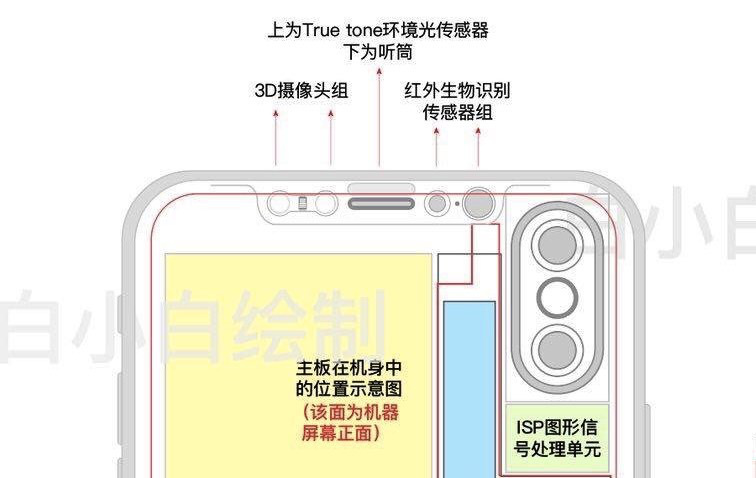 The schematic indicates the phone’s dual camera will have a vertical alignment, as previously rumored. The drawing above also seems to suggest the front-facing camera and sensor placement is what dictated the move, since Apple is fighting to make use of every piece of available space inside the phone. 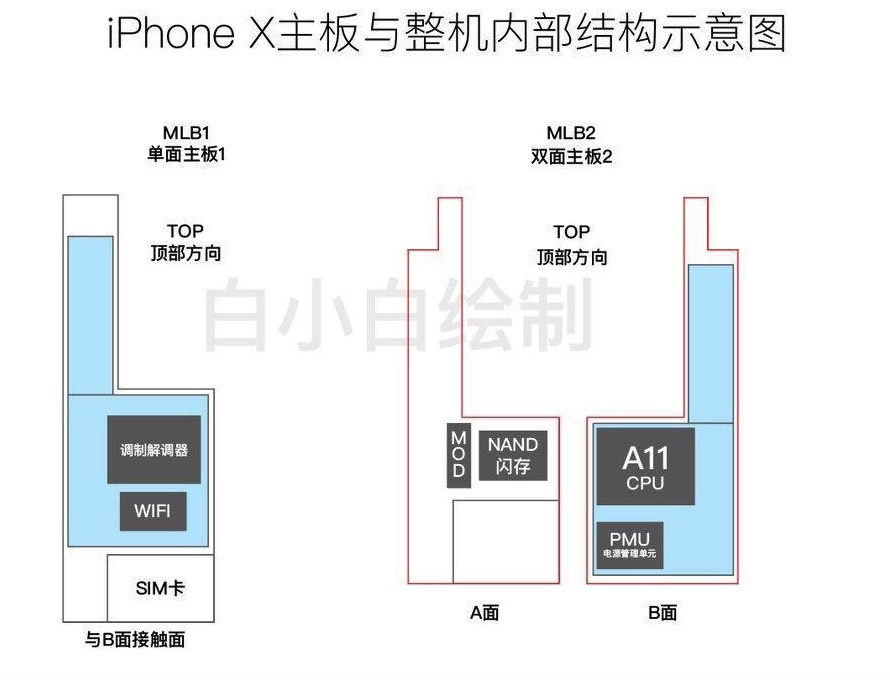 The iPhone 8’s mainboard has been made even smaller, and the drawing shows that each side of the board will house specific chips. Earlier reports did say the iPhone 8 will have a stacked mainboard design that will help Apple dedicate more internal space to the battery. We can easily spot the location of various chips, including the A11 processor, the power management unit, the NAND flash memory, the cellular and Wi-Fi modules, and the image signal processor.

The schematics suggest Apple is placing two battery units inside the phone, one that occupies almost the entire left side of the handset, extending well over half the width of the phone. The secondary battery is placed underneath the SIM tray. 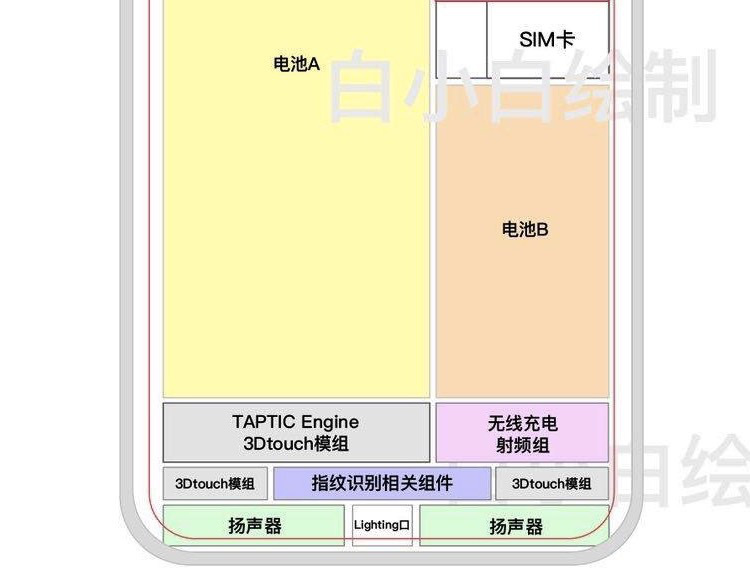 The drawing seems to indicate the phone will have two speakers flanking the Lightning port at the bottom, which would be an improvement compared to the current iPhone 7 design.

The schematics also says that Apple will add quite a few components towards the bottom of the phone, including a Taptic Engine and 3D Touch module, and two standalone 3D Touch modules that would flank a fingerprint reading component (in blue above the Lightning port). This particular detail suggests there’s no physical home button on the iPhone 8, and the space that had been occupied by the home button has been repurposed for these new components.

Also interesting is the wireless charging module, seen in pink under battery pack B in the image above. That said, there’s no way of confirming the authenticity of these schematics at this time. 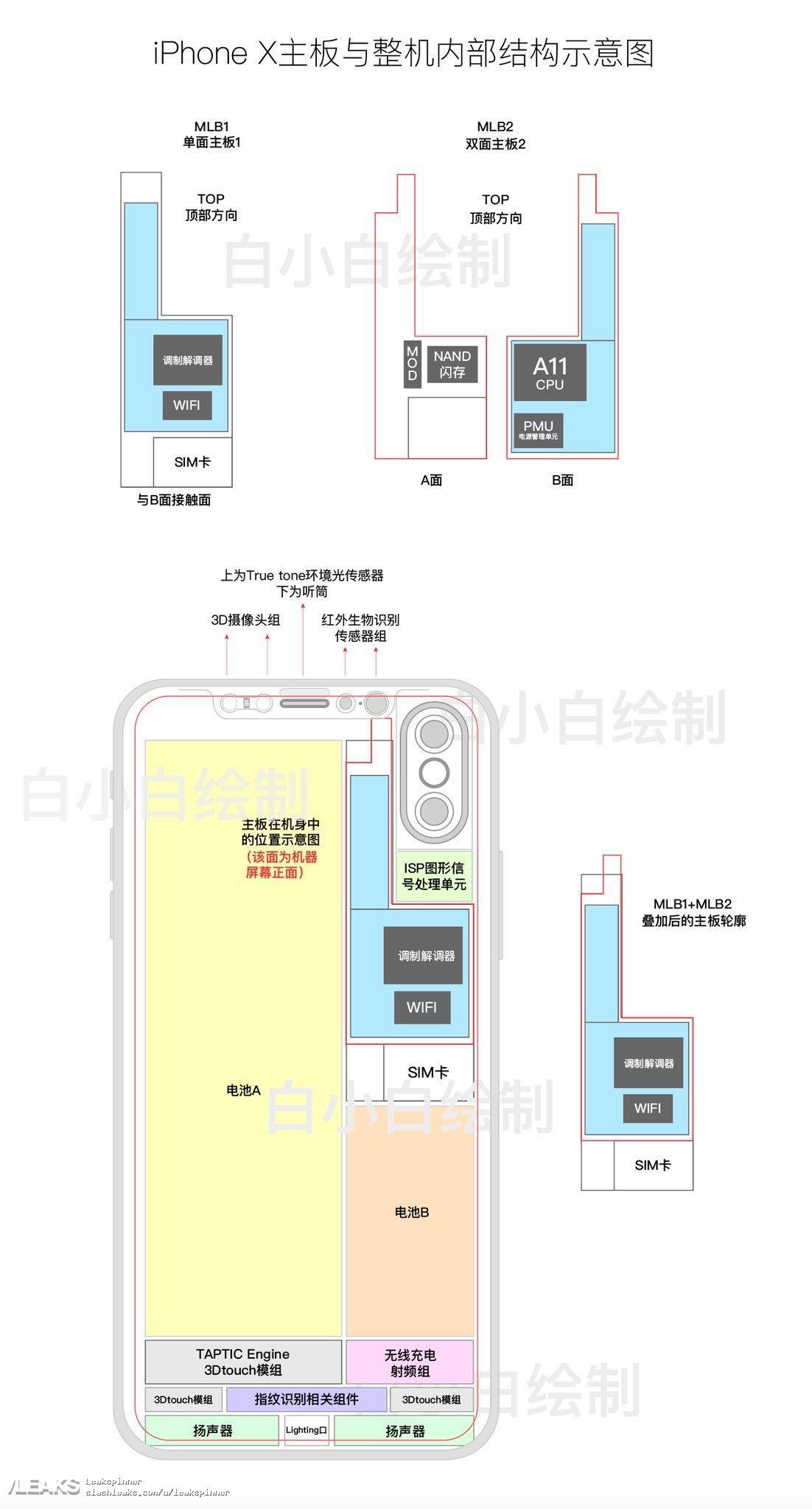